ALGAR in partnership with Docapesca 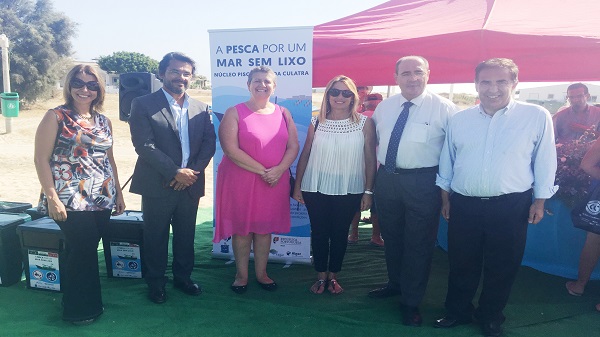 ALGAR, the EGF Concessionaire for the Algarve region, is a partner of DOCAPESCA Portos e Lotas, SA in the course of the project The Fishing for a Sea without Trash, whose objective is to combat one of the main threats to the preservation of marine resources and ecosystems - the Marine litter.

This project joins fishermen and ports in improving the environmental conditions of our coastal zone. Algar is a partner of the initiative in the region in the Algarve, through the provision of 120L containers to the Fishery Center of Culatra Island, for the disposal of recyclable waste collected by the fishermen (plastic cups and bags, beverage packages, cans and Styrofoam). These wastes collected at sea or produced on the vessels are sent to shore by the fishermen, who put them in Algar containers. Fagar takes care of transporting all the waste (recyclable and non-recyclable) from the island of Culatra to the facilities of Algar, where they receive the appropriate treatment.

The initiative is part of one of the voluntary commitments of Portugal, undertaken by the Ministry of the Sea, within the framework of the 14-Oceans Sustainable Development, whose purpose is:

1. Improve the management of waste aboard fishing vessels;

2. To sensitize and support fishermen in the adoption of good environmental practices in the Portuguese coastal zone;

4. Promote the collection of the waste generated on board and captured in the fishing gear and provide adequate infrastructures for its reception.

In addition to DOCAPESCA, Algar and Fagar, the remaining participants in this process are the Associação Moradores da Culatra, the Portuguese Lixo Marinho Association and the Faro Municipal Council.

The project started at Culatra on August 21 with 102 members (boats, nursery and shellfish), a result substantially higher than the one reached in Peniche, where the pilot project of this initiative was launched and currently has 66 members. DOCAPESCA intends to monitor fishermen on a quarterly basis to monitor the evolution and degree of adherence to the initiative. The initiative was attended by the Minister of the Sea Ana Paula Vitorino, Secretary of State for Fisheries José Apolinário, Miguel Lisboa President of Algar, Teresa Coelho President of DOCAPESCA, Rogério Bacalhau Mayor of Faro, Silvia Padinha President of the Association of Residents Of Culatra and Sofia Quarema representative of the Portuguese Association of Marine Litter, among other local entities.

Every year millions of tons of garbage reaches the oceans. Fishing activity is greatly affected due to damage to fishing gear and vessels and to the reduction of catches resulting from ghost fishing, where lost or abandoned nets and traps lead to the continued imprisonment and death of fish and other marine species.

Marine litter is a social problem in which individual and sectoral decisions and behavior play a crucial role in solving it. This project works on two levels: in the prevention of the entry of garbage into the marine environment and in the removal of marine litter from the oceans. Collaboration between fishermen, their vessels and fishing ports is important for raising awareness among coastal communities, fishing communities and promoting the co-responsibility of all those who are directly or indirectly involved in this problem.

Did you know that marine litter ...

Time it takes to decompose