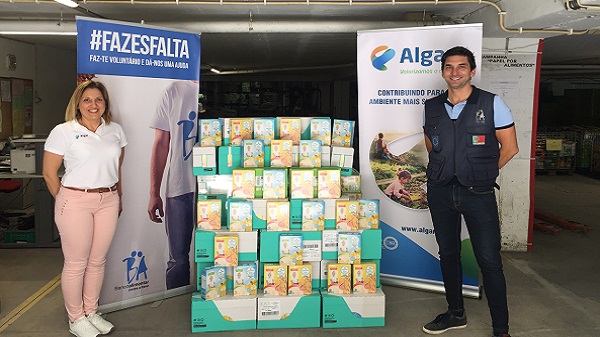 ALGAR, EGF concessionaire in the Algarve region, and ENTRAJUDA (Algarve), have revealed results of the "Separar para Alimentar" campaign in favor of the Food Bank Against Hunger in the Algarve (BACF), an initiative that has been in existence for 5 years .

The objective of this campaign has been to collect plastic, metal and ECAL recyclable packaging (cartons for liquid food) and with its sale to purchase food products suitable for children up to 36 months of age. As part of this action, deposition centers were set up to collect material at ALGAR and at the Alimentar Bank of Algarve.

The results of 2018 allowed us to obtain sufficient funds to purchase approximately 680 food potatoes, adapted to the specific nutritional needs of children in this age group, which will be delivered to families supported by the Algarve Food Bank.

According to Nuno Alves, President of the BACF of the Algarve «The BACF of the Algarve currently cooperates with 107 institutions, providing support to 3,818 families through the distribution of food to 9,410 people, of which 2,219 are children under 12 years of age , for whom this support of the "Separar para Alimentar" will go.

The BACF also contributes with 19,704 meals that are prepared daily by 63 institutions (breakfasts, lunches, snacks and dinners). "

"Since 2013 the campaign has received adherence by the population and several local entities, which with the gesture of separation of waste already ensured the referral, to recycle 44 135 kg of waste packaging and allowed the delivery of € 5,000 in food, helping those who need it the most. "says Telma Robim, Chairman of the Algar Executive Committee.

The result of this initiative has been very positive, so it will continue until August 31, 2019, when it will end to give rise to "tons of aid", a project that will be released by Algar later this year.

Until then, all those who wish to collaborate with the "Separar para Alimentar", will be able to deliver the empty packages at Algar's facilities, which are distributed throughout the Algarve region (www.algar.com.pt) from Aljezur to Alcoutim, or on the premises of the Food Bank in Portimão and Faro, informing that they do it in favor of the campaign.

Advantages of Recycling for the Environment - Curiosities

The separation of packaging for recycling allows saving natural resources, but without the collaboration of all will be impossible to succeed. The 44,135 kg of plastic containers that were sent for recycling during these five years of the campaign allow the production of sufficient raw material (polyester) to produce 54,494 polyester sweaters or 88,000 pairs of polyester pants. So contribute, be part of this cycle, always separate and everywhere!