EGF was present at the Talkfest 2019, an International Forum of Music Festivals, for organizers, held in Lisbon at the Museum of Communications on 22th March.

The participation was assured by the Director of Communication, Ana Loureiro, who presented the EcoEvents campaign and the measures and supports that the festivals can have to be more sustainable, with a main focus on the theme of waste management.

This initiative was attended by the Minister of Culture, Graça Fonseca, who called for the need for festivals to be increasingly sustainable and was once again the showcase of current themes that interfere in the sphere of festivals.

Promoters, presidents, mayors, artists, journalists and service providers together inside and outside the various auditoriums / rooms for the acquisition of tools and enhancement of their network of contacts The news was given firsthand at festivals, : the presentation of the Amsterdam Dance Event case study by its director; the interview with Rototom Sunsplash's director of communication and the presentation of the 2018 edition of "The profile of the festival" (APORFEST study) which indicated an increase in the number of festivals consumed.

The EGF also presented a ranking of more sustainable events in 2019, out of a total of 200 EcoEvents carried out in its area of ​​intervention. The aftermovie of this initiative can be seen HERE 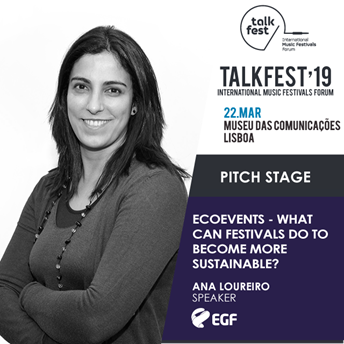