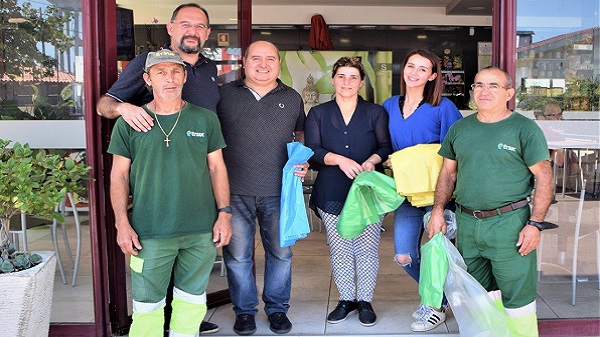 ERSUC, EGF's concessionaire in the central region, and the Albergaria-a-Velha City Council, have established a partnership for door-to-door collection of recyclable waste in commercial establishments, services and schools, with the aim of diverting recyclables from undifferentiated waste stream.

“This partnership meets the objectives and targets set out in the ERSUC Selective Collection Resumption Goal 2020 PERSU Action Plan, and involves the provision of various means, including 1 collection vehicle, 2 employees, bags for the separation of recyclables, previous training of teams and awareness actions for all schools involved in the project. ”, explains Miguel Ferreira, Executive Director of ERSUC.

The implementation of the project on the ground involved the teams of ERSUC and the Municipality, with sensitization to the establishments, which were made available green, blue and yellow bags to collect respectively glass, paper and cardboard and plastic and metal packaging, later collected. door-to-door on predefined days and sent to the ERSUC screening facility in Eirol.

After 2 months in the field, with more than 150 schools and 25 participating schools, 7.4 tons of paper and cardboard, 8.8 tons of plastic and metal packaging and 4.7 tons of glass have been collected.

“This partnership allows us to provide a better service to the population of Albergaria-a-Velha, getting closer to the production sites and meeting the need for recyclable management, contributing to a better environmental performance of the municipality,” says António Loureiro, Mayor from Albergaria-a-Velha.