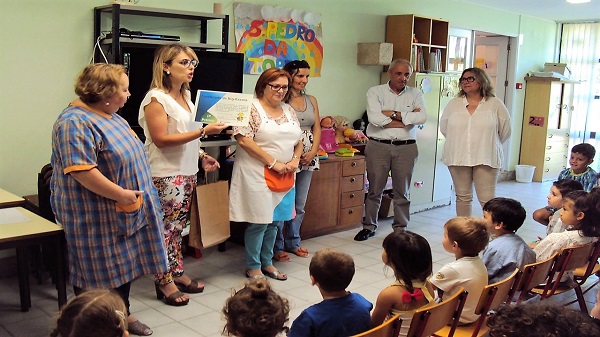 The Kindergarten of S. Pedro da Torre, located in the area of ​​VALORMINHO, won the first edition of the contest Come With Us in this Big Separation.

The so-called "Recycling Agents" took on the mission of collecting plastic and metal in containers, which were then packed in big-bags during the tender period, and afterwards, to have the respective collection and weighing of them .

In this first edition, the 1st of the Kindergarten of S. Pedro da Torre presented the best result in the ranking of separated waste, registering 11.63 kg / student, having received the BIG SCHOOL CERTIFICATE, a book as a participation prize and a didactic prize in the value of the total about recycled. All schools that participated in the contest received a certificate of participation and a book alluding to the Environment "Handicrafts Friends of the Environment".
This contest included the collection of 2.5 tons of packaging, helping the school to improve its environmental performance even more, sensitize and mobilize the surrounding community.

Valorminho intends to continue to promote this kind of initiatives, so it is expected to hold the 2nd Edition of the competition in the 2017/2018 school year, covering other schools and continuing to bet on the propagation of the message of good environmental practices.