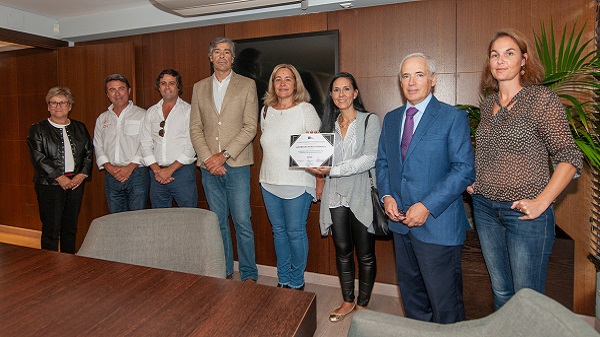 About 14 tonnes of recyclable waste, including 7 tonnes of glass, 5.7 tonnes of carton and 700 kg of plastic, was collected during the 420 class World Sailing Championship in Vilamoura in July this year.

The recyclables collected during the 9 days of the event by the company ALGAR, EGF concessionaire in the Algarve region, after being weighed and 'measured', gave rise to a thousand euros, which Vilamoura Sailing, the organizer of the competition in partnership with the company. Inframoura, made a point of handing it over to the Quarteira Child Support Center.

It was the first time that a sailing championship has been awarded the 'Eco-Event' distinction awarded by Algar and has resulted, among other actions, in the production of 250 bags of recycled fabric, made from canvas, canvas, billboards and mupi, which they functioned as eco-points (garbage separation) and were placed on coaches' vessels. In these eco-points, all the test sailors deposited, daily, not only the recyclable packaging they were producing, but also the recyclable ones that made a point of collecting from the sea.

According to Nuno Reis, Vilamoura Sailing Director, “from the beginning, the aim was to strengthen the ecological awareness of the sailors and this will be a challenge to continue. The 420 World Cup was a test event in this regard and its success was proven. The partnership with Algar will be repeated in all our events and will also extend to the activity of the internship center ».

The logistics coordination of the program during the 420 World Championship was performed by Inframoura and also involved the services of Marina de Vilamoura, where Algar daily collected containers with recyclable waste.

In this event the usual plastic bottles were also replaced by aluminum bottles and the prizes awarded were all produced in cork from cork oaks in the region.

Inframoura will continue to mediate and encourage the events taking place in Vilamoura to adhere to these actions, in order to stimulate and raise awareness of the problem of waste and, at the same time, with the values ​​raised can contribute with donations for the improvement. the quality of the services provided by the IPSS of this parish.