ALGAR with actions in Lagos 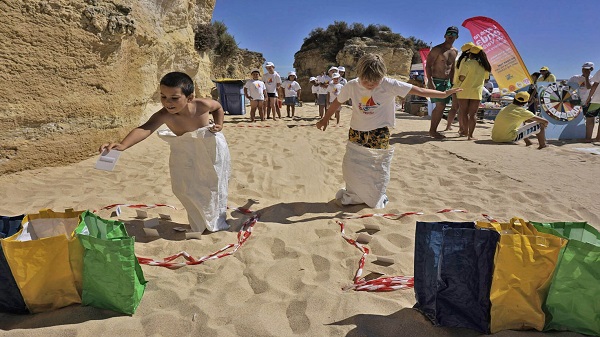 ALGAR, EGF Concessionaire for the Algarve region, collaborates once again with the Lagos City Council in the framework of the activities of the Campaign "Lakes in the Wave of Summer - 2017".

As part of the Blue Flag Campaign, Lagos City Council has continued the awareness campaign / Environmental Education "Lakes in the Summer Wave", which aims to raise awareness, inform and raise awareness among the population, particularly children, of existing problems in particular the role that each of them can play in reducing and eradicating some of these problems, thereby contributing to the achievement of sustainable development. The aforementioned project continues to be widely and innovatively coated and has been available during the bathing season in the months of July and August of the current year. The pedagogical activities / games and animation in the sand are developed in thematic workshops, whose themes are: "Waste & Pollution", "Energy & Climate Change", "Water", "Your planet is your land: "Taking care "and" Healthy Eating & Wellness ".

Thematic workshops have been held on Mondays, Wednesdays and Fridays (except public holidays), in the morning, on the beaches of the Municipality of Lagos. Algar has been a collaborator of this project since it was implemented and similarly to previous years has participated through the dynamization of activities in the weeks whose theme is "RESIDUES & POLLUTION". In July Algar was in Praia da Luz and in August Algar was in Porto de Mós beach, on August 28th and 30th. For more information: www.algar.com.pt