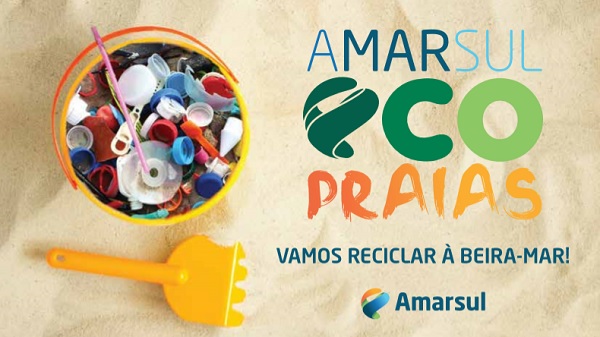 The EcoPraias campaign is back for another edition to "recycle by the sea" in the Setúbal Peninsula. Promoted by Amarsul, the campaign returns to encourage citizens who visit the beaches, as well as concessionaires who explore the beaches, to be more sustainable, adopting good practices for separating waste and enhancing the use of existing recycling equipment.

The increase in the population during the bathing season (in the months between June and September), on the beaches in the area covered by Amarsul, has a relevant impact on the production of waste and, therefore, an important responsibility in the fulfillment of national objectives in terms of promotion of the circular economy and territorial enhancement.

The “Amarsul Eco Praias” Campaign, in partnership with the Municipalities of Almada, Sesimbra and Setúbal, provides a network of recycling bins and awareness-raising actions that alert the population visiting the region, to maintain social distance and to recycle by the sea, routing their waste to the right containers and diverting it from the oceans and landfills. The environmental awareness campaign will be implemented on 37 beaches and, during the bathing season, services, equipments and bags will be made available.

Awareness-raising actions will be carried out at the entrance of each beach - respecting the rules of social distance - between the 4th of July and the 30th of August, from 10am to 12pm and from 3pm to 5pm (Saturdays and Sundays), distributed as it follows:

With this project, Amarsul intends to continue to increase the amount of packaging sent for recycling, as well as the offer of selective collection points on the beaches, leveraging the civic act of separating packaging waste by the general population and thus reinforcing the adoption of more sustainable practices, under the motto “let's recycle by the sea!”.