In the Algarve be Algarvian

Algar, an EGF concessionaire in the Algarve region, has launched a new awareness-raising campaign on selective packaging separation, with the aim of encouraging the use of ecopoints by residents and visitors in the region during the summer. online newspapers in Mupis and Municipal Outdoors.

The initiative was created based on the concept: In Algarve be Algarvian, recycle!

For a local visitor the issue of recycling is something of everyday life, where the habit of separating at home may already be rooted, but that on vacation often falls into oblivion.

For an Algarvian to go to Ecoponto means to preserve their land, since the recyclable materials that can be placed in the ecoponto are not landfilled. It is also a source of regional pride, especially due to the results of the amount of recyclables sent annually, per capita, compared to the values ​​presented in other regions of the country.

The campaign thus shows the Algarvians' pride in the good results of recycling and reminds visitors to travel to Ecoponto during their holidays, showing both that recycling is very serious in the Algarve.

The images of the campaign are based on the Algarve heritage (most tourist universe), namely: culture, gastronomy, climate and natural beauty, always passing the message “SEPARE”, as follows:

Recycling is also our beach… .. The Algarvians have over 3500 ecopoints available…. In Algarve Be Algarve: Separate

Recycling is also part of our nature…. The Algarvians separate more than 38 thousand tons of waste per year…. In Algarve Be Algarve: Separate

Recycling is also part of our culture…. The Algarvians separate more than 15 thousand tons of glass per year…. In Algarve Be Algarve: Separate

The images chosen to illustrate the campaign are visual references from the Algarve and allow to easily associate the message and concept of the campaign with the most attractive points sought in the region. 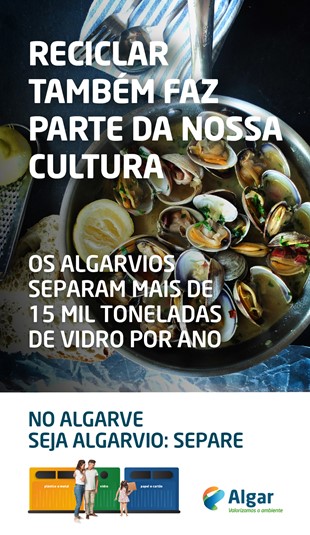 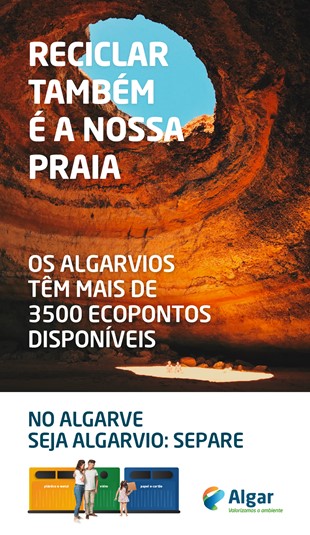