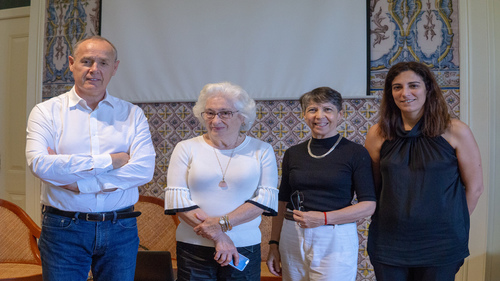 EGF and it´s 11 Concessionaires support and participate in the speeches of intervention of the Center of Communication of the Oceans, which begins on July 4, at 4:00 pm, at the Lisbon Academy of Sciences. The first session, moderated by Nysse Arruda (journalist and curator), counts with the participation of biologist Jessica Link (University of Santa Catarina, Brazil), Chef Luis Baena, Ana Loureiro (Director of Communication of EGF) and a exclusive interview with Garret McNamara (Giant Wave Surfer).

The companies ALGAR, AMARSUL, ERSUC, RESIESTRELA, RESULIMA, RESULIMA, SULDOURO, VALNOR, VALORLIS, VALORSUL and VALORMINHO, are betting on new ways of giving visibility to the essential work they do every day to treat and value the waste produced by all citizens, giving visibility to the consequences of bad behavior, but also to the solutions that exist to avoid them.

Pollution of the oceans is a consequence of human activity that is urgently needed to be countered, and the solution is to adopt adequate behavior on the land and at sea and a system for treatment and recovery of waste that is effective and sustainable.

The sessions begin on July 4, at 4:00 pm, at the Lisbon Academy of Sciences, which can be attended in person and free of charge, but also in LiveStream at www.ccoceanos.pt

The first session has the following program:

Diving into the Phantom Fishing Problem

The diversity of fish in Portugal and its gastronomic possibilities

Chef Luis Baena: One of the few Portuguese chefs to have worked with Paul Bocuse and to add 32 years of career in four continents (including in Brazil). Pioneer in its commitment to innovative projects and promotion of the traditional products of the Azores.

Valuing Waste on land to protect the Sea

Ana Loureiro: Communication Director of EGF, Global Environment Facilities (reference company in the environmental sector at European level and leader in Portugal in the valorization of urban waste.

The many profiles of the giant waves

The next sessions are scheduled for 4, 11, 18 and 25 July - the program of the sessions will be presented on the website www.ccoceanos.pt

The Oceans Communication Center is a project of Nysse Arruda, journalist and curator, nautical specialist for more than 20 years in Portugal, author of several publications and awarded in 2016 by the Femina Prize. She started this project to promote the debate about the essential issues associated with the Sea, and obtained institutional support from several institutions, especially the Presidency of the Republic, the Ministry of the Sea, the Ministry of the Environment, the Lisbon City Council, the Hydrographic Institute, the Sciences of Lisbon, IPMA and Unesco-Portugal.

This project is also sponsored by the Olympic sailors João Rodrigues and Joana Pratas, but also with the Brazilian sailor Torben Grael, the surfer Garret McNamara and the American NGO Marine MegaFauna Mozambique.