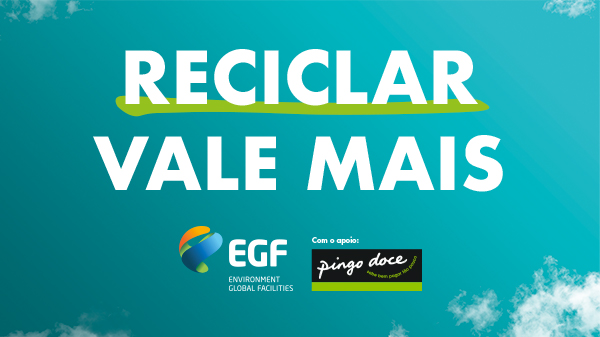 EGF will provide a national network with economic benefits for the Portuguese that separate their used packaging. Recycle More campaign will run from north to south of the country in 15 Pingo Doce stores. When delivering the used packaging in the Ecoponto, in bags of 30 or 50 liters, EGF offers 0,10 € or 0,15 € in Poupa Mais card, for immediate use.

This pioneering initiative in Portugal is taking place within the framework of EGF's national social innovation program, in which seven of its concessionaires (Amarsul, Ersuc, Resinorte, Resulima, Suldouro, Valorlis and Valorminho) are developing this action with the co-financing of POSEUR Operational Sustainability and Efficiency in the Use of Resources.

Recycle More campaign aims to sensitize the population to the separation of waste and, at the same time, to warn of the immediate benefit of placing the used packaging in the ecoponto, demonstrating that recycling has value by returning to the citizen a part to be able to discount in their purchases in stores Pingo Doce. This also seeks to ensure that national targets are met and that the used packaging is delivered to the companies responsible for its management and treatment.

This pilot campaign will be present in 15 Pingo Doce stores throughout the country, which supported this initiative by giving space in the car parks of its establishments. For two months money will be offered in Poupa Mais card in exchange for used packaging delivered to one of these collection points. The campaign is available in the stores of Quinta do Conde, Barreiro and Alcochete, Porto de Mós, Batalha, Águeda, Aveiro, Vila Nova de Gaia (Coimbrões), Santa Maria da Feira, Fafe, Vizela, Arcos de Valdevez, Viana do Castelo Portuzelo), Monção (Gandra) and Vila Nova de Cerveira (Place of Faias).

The management of waste treatment and recovery systems is carried out through 11 concession companies (Algar, Amarsul, Ersuc, Resiortela, Resinorte, Resulima, Suldouro, Valorlis, Valminor, Valorsul), established in partnership with the municipalities served, which process approximately 3.2 million tonnes of urban waste (UK) annually, serving a population of 6.3 million people in 174 municipalities in an area equivalent to 60% of the territory in Portugal.