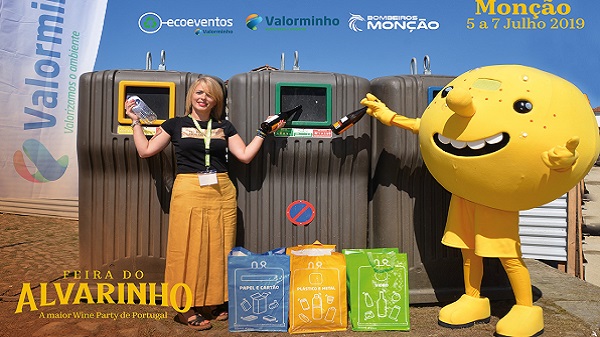 There were 12 tons of packaging waste sent for recycling and that resulted from adequate environmental behaviors of the participants and organizers of the Alvarinho of Monção Fair. This initiative took place between July 5 and 7, where a new ECOEVENTOS flag was promoted, promoted and supported by Valorminho, EGF's concessionaire in Alto Minho.

Since the Environmental issue is a priority, this partnership has contributed to a better environmental performance of the Municipality of Monção and consequently of the country, regarding the management of the waste produced during the whole event.

The Environmental cause this year joined hands in solidarity, the joint could not have been better! All recyclable waste has been "transformed" into euros (€), which will revert this year to the Humanitarian Volunteer Firemen Association of Monção.

The producers of alvarinho were present and also the difference, and Valorminho provided 30 m3 structures for the packaging of glass, paper / board and plastic and metal packaging, reinforced the enclosure containers, distributed glass, distributed containers of 240 l for the stands producing alvarinho, provided structures for the selective deposition.

Valorminho and the Municipality of Monção sensitized all the stands installed, with the distribution of Ecobags for the separation of waste.