VALORSUL at the Lisbon Week 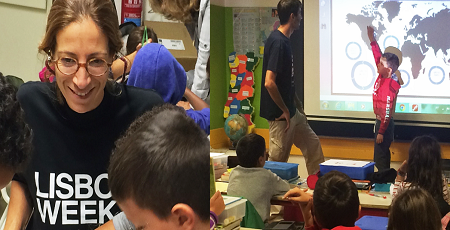 In the 4th edition of Lisbon Week, VALORSUL, EGF Concessionaire for the Lisbon and West region, is a partner of the educational project directed to the schools of the parish of Lumiar (Lisbon). With this partnership, Valorsul will open the doors of its Sorting Center to these students, with the aim of publicizing the activity of this facility and what to do with the garbage they produce.

Located in Lumiar and operating since February 2002, the Valorsul Sorting Center receives and treats the recyclable materials that citizens have separated in the counties of Amadora, Lisbon, Loures, Odivelas and Vila Franca de Xira. In 2015, approximately 57.000 tonnes of recyclables were received.

2.000 students will be involved, from 13 Lumiar schools, in creative workshops, in which students will reuse packaging, the Lisbon Week educational project, complies with the 3 R's policy - Reduce, Reuse and Recycle - and meets the objectives of Valorsul, in promoting the reuse of materials. It also has the support of the Green Dot Company.

The proposal of the 4th edition of Lisbon Week, which runs between March 25 and April 2, 2017, will be to live and rediscover Lumiar, the oldest parish in the city, which closes the celebrations of its 750th anniversary in 2017, being currently the Parish with the largest number of inhabitants of Lisbon. The historical and patrimonial relief of the territory will be highlighted in parallel with the relevance of the experiences that it presents in its day to day. With the objective of decentralizing the attention of the most visible areas of the city and creating a new look about its unique neighborhoods, showing the relevance of its spaces and all its intangible heritage. "Every neighborhood, a city." - It will be the signature of the 4th edition of Lisbon Week in reference to the rediscovery of the city that has no end for 10 days. More information at www.valorsul.pt