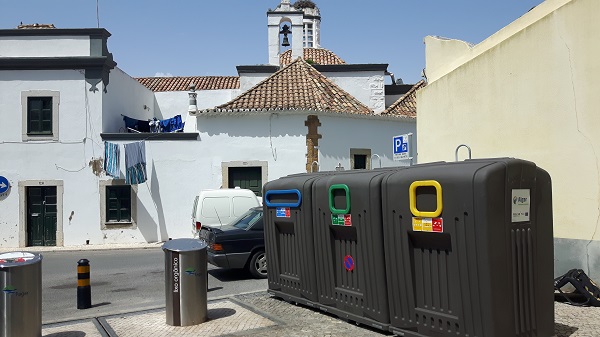 EGF concessionaires reorganize more than 78,300 ecopoints across the country to promote inclusion and increase recycling

Among the several planned actions is the reorganization of ecopoints, in order to promote recycling among citizens with limitations. More than 78,300 ecopoints from North to South of Portugal will have a new order - Blue, Green and Yellow - thus helping those with visual limitations. This action is expected to be completed in February 2021.

The solution is simple: just orderering the ecopoints containers always the same way, from left to right - blue, green and yellow. In this way, blind or visually impaired citizens will always know which container is for each type of material.

“With this action, we not only want to have more citizens recycling, but we want them to recycle better and for that we have to be more and more inclusive. The campaign - The Future of the Planet is Not Recyclable - is more than an advertising film, this is the biggest awareness movement that has ever been made, because together we can be the engine of a necessary and urgent change”, said Emídio Pinheiro, Chairman of the Board of Directors of EGF.

EGF's concessionaires have already started this project in their areas of operation and expect to conclude the action in four months. At the same time, EGF invited all waste treatment and recovery systems, city councils and organizations, to adopt the same procedure, so that it is possible to standardize this practice across the country.

In addition to ecopoints' ordering, the recycling code present in various information media is now available in audio description. If on one hand, the recycling signs already had the colorADD symbols (which support color identification for colorblind citizens), blind and visually impaired citizens can now hear these rules available on EGF's website or hear the campaign announcement in this format.

Besides these initiatives, there is also the subtitling of all the films shown, including the TV ad, which allows the deaf community to understand them, and some content presented by company employees whose physical and/or psychological limitations were not hindering to their participation.

Launched this month by EGF and its 11 concessionaires, a leading group in the treatment and recovery of waste in Portugal, this is the largest environmental awareness campaign ever developed in Portugal with European funds and has an investment of around one million euros.

More information about the campaign at: www.egf.pt/o-futuro-do-planeta-nao-e-reciclavel/